How Contributions Have Supported the Recent Advance of American Kosen-rufu

Appreciation and human revolution are key to the spirit of May Contribution. 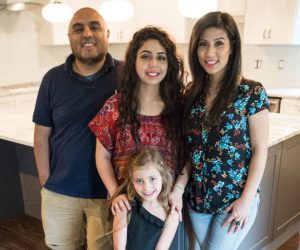 I never envisioned that I would be where I am now, running three successful companies, with a happy family and great kids. It all began when I stopped allowing my past to determine my future.

I received the Gohonzon in 2005, when my wife’s father introduced me to the practice. But I didn’t start chanting Nam-myoho-renge-kyo in earnest until after my divorce in 2008.

After seven years with the same company, I was laid off. And due to two felonies from my teenage years (when I had been foolish and arrogant), I found myself unable to find work. The IRS began hounding me every day for a tax lien payment. I felt like my whole world, which had seemed so easy and routine, was falling apart.

I blamed my environment, the market crash, everybody else. I was living in a constant state of fear and anger. But my ex-father-in-law kept offering me encouragement and inviting me to SGI meetings. I would say, “Yeah, sure,” because they always seemed to be about a month away. One day, he called me while I was driving and asked me where I was. When I told him, he said: “You’re driving right by the SGI center. They’re starting an intro meeting now. Why don’t you go?” I’ve never believed in coincidences, so I went.

Surrounded by friendly faces, the members were surprised to find out that I had already received the Gohonzon. I decided then to give Buddhism a try. Although I chanted inconsistently, when I began attending more young men’s activities and supporting meetings, I always felt happier afterward. I even took on a leadership position.

I was doing Gajokai shifts (a young men’s training group activity in the SGI) with the worn-down truck I used for a small landscaping business I had started in 2006. I sometimes had to choose between food and a bill, even borrowing gas money to get to the SGI center. And the felonies on my record really tormented me, because I dreamed of doing some other kind of work.

By 2010, I felt like I had no time to commit to the SGI anymore and went to a senior in faith to resign as a youth leader. Instead of accepting my resignation, he encouraged me to go to a conference at the SGI-USA Florida Nature and Culture Center and refresh my faith. I had no money but chanted to go anyway. Only a few days later, someone who owed me money unexpectedly paid up. It was enough to go to the FNCC.

The conference was great; I was able to refresh my practice. But I still couldn’t break through in my work. Struggling, I sought career advice from a senior in faith, who told me, “Follow your dreams.” For maybe the first time, I allowed myself to dream, in spite of my past, and chanted sincerely and consistently to realize a new direction.

I realized the more time I made for kosen-rufu, the more the rest of my life fell into place.

Then, through a friend, a property management company offered me a management opportunity. This company handled 500 properties in the greater Dallas area and also needed landscaping! I was able to hire someone to manage my own landscaping company, so I could devote myself to managing the new business, which was more personally satisfying.

My fortune began turning around. I was able to clear up my debt with the IRS and move forward without fear hanging over my head. I realized the more time I made for kosen-rufu, the more the rest of my life fell into place.

Even early on in my practice, I would think to myself, If this center hadn’t been open this morning, I wouldn’t have been able to get encouragement from this leader, or to hear SGI President Ikeda’s message. I have always liked contributing financially to the SGI. I’ve done it since I began practicing in earnest in 2008 to show gratitude and appreciation for the organization and the members. I knew that even small contributions like mine added up.

Today, I continue to challenge myself to “strengthen my resolve more than ever” (“The Supremacy of the Law,” The Writings of Nichiren Daishonin, vol. 1, p. 615). Just as my seniors in faith have done for me, I now have the fortune to serve the members as the Dallas Region men’s leader.

Because of what I’ve learned from property management, I started a third company a couple of years ago—a real estate investing firm, which was a huge benefit. Now I can attend any SGI meeting because of my flexible schedule.

I’m back together with my ex-wife, Jennifer. While we were apart, she had a daughter. We are all chanting together these days. I look at my daughter, Caitlin, 17, and my 5-year-old stepdaughter, Brooklyn, as the future, and I’m investing in the future.

Because of my financial contributions to the SGI-USA, my daughters will always have an SGI center open and available to them. Caitlin will be attending her first SGI-USA conference this June at Soka University of America for the junior high and high school division. Next year, when 50,000 determined youth gather to uphold the dignity of life, Caitlin will graduate high school. I’m determined that she will win, no matter what.

From my perspective, it all comes back full circle. Everyone I share Buddhism with is an investment in the future and in my children’s future. It’s all connected—my family, the SGI and Sensei’s earnest wish for each member to become absolutely happy. My determination is that every SGI center be open, all the time, for anybody who is struggling. The SGI will remain open forever—as long as I contribute.