Alex Boling, Marty Chapman, Mira Gandy, Phyllis Goodson, Gary Murie and Kelly Niceley, the leaders of SGI-USA’s LGBTQ (lesbian, gay, bisexual, transgender, queer and questioning) group, Courageous Freedom, talk about the growth and development of the group and what Nichiren Buddhism and the SGI can offer to the discourse on gender and sexuality. 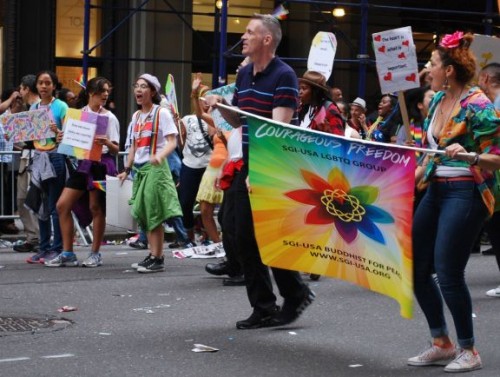 What is the story behind the formation of SGI-USA’s LGBTQ group, and how has it developed since?

Gary: The first time self-identifying LGBTQ members gathered together in SGI-USA was in the early 80s. Many members were dying of HIV/AIDS-related causes, and LGBTQ members wanted to openly support one another with their Buddhist practice by chanting together or meeting to have dialogue. Some areas of the country welcomed these gatherings; other areas did not.

Then, in the late 80s, SGI President Daisaku Ikeda encouraged an American member who had been in an arranged marriage, saying we should live true to ourselves. This guidance opened the way for SGI-USA to more boldly support its LGBTQ members. In the 90s, when America’s LGBTQ community was standing up and demanding equal rights, the organization started performing same-sex commitment ceremonies at SGI-USA community centers. Members in major cities began participating in pride parades, and a few openly LGBTQ people were appointed to senior leadership positions.

In 2000, members proposed an SGI-USA LGBTQ study conference, the goal of which would be the same as for every SGI-USA conference—to deepen our faith and understanding of Nichiren Buddhism.

That first conference, held in 2001 and repeated annually ever since, was filled to capacity, and to date more than 3,000 LGBTQ members have attended. Many local LGBTQ groups started to form across the country. Soon, official appointments for LGBTQ leadership were made. Now, we have leadership across the country supporting quarterly introductory Buddhist meetings, local pride parades and interfaith conferences, and LGBTQ members have been appointed to leadership positions at all levels within SGI-USA.

As the faith of LGBTQ members deepened, we started to see that our most profound, most value-creating identity was that of a Bodhisattva of the Earth—someone who is dedicated to winning over their circumstances and being absolutely happy and helping everyone they encounter become absolutely happy too. From this perspective, we were able to take responsibility for whatever suffering we may have been experiencing and, where LGBTQ people have often been loathed or misunderstood, to transform ourselves into treasured members of our families, communities and society. This positive transformation within us began to be reflected in the attitude of many of the members who didn’t understand or who had been opposed to LGBTQ people. Today, LGBTQ people are deeply interwoven into the fabric of the SGI-USA family.

In April 2015, SGI-USA announced “Courageous Freedom” as the new name of your group. What significance does the name have for you?

Phyllis: Courageous Freedom represents our efforts to promote greater inclusivity within the sex/gender communities in SGI-USA. The annual LGBTQ conference has been held with the intention of including and supporting all sex/gender minorities, but there were many who felt excluded by this acronym. We now have a name that is all-inclusive and rooted in our shared determination and vow for kosen-rufu, the path to ending prejudice and achieving equality and peace for all.

In the end, without equality in our hearts, we will never end prejudice.


Gary: Courageous Freedom is having the courage to take responsibility for our lives and not blame the environment or our surroundings for our sufferings. Establishing a state of freedom is not just about our external circumstances but also about our inner freedom. LGBTQ people have endured centuries of oppression, but Buddhism reinforces the notion of the greatness of every human being. To live with this confidence is to be a Buddha of absolute freedom. It’s the only way to truly transform our society, because, in the end, no matter how much equality we achieve on the outside legally, without equality in our hearts, we will never end prejudice.

Mira: It’s not always easy living as an LGBTQ person in society, and there are many people who feel helpless or trapped in their life circumstances. Courage and freedom are necessities for living a happy life. Our new name is not just a title or label—it encompasses the heart and spirit of this Buddhism. Our new name is a reminder for us to be courageous in faith and feel free to be ourselves. 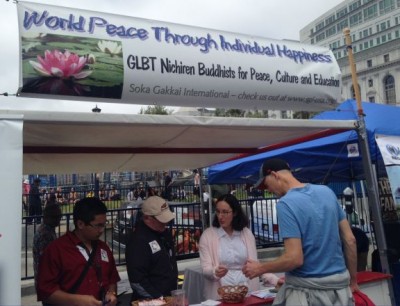 Kelly: I received my Gohonzon at an SGI LGBTQ meeting. So, from the start, I always felt a profound sense of freedom within this religious organization that was unlike any previous experience. This is something that gives me immense pride to practice with the SGI. The “courageous” aspect of the name, for me, indicates the courage to share of oneself openly and specifically to share this transformative and life-affirming Buddhism with the people around us. I believe Courageous Freedom is synonymous with a spirit to acknowledge the dignity of every human being while striving to overcome the human tendency to point to distinctions and differences that ultimately lead to suffering. It is to challenge these tendencies in oneself first and to be an example of self-worth, mutuality and respect toward others.

Are there any inspiring stories that have emerged from the formation of the group?

As a young men’s leader in SGI-USA, I felt afraid of deeply connecting with other members, thinking they would reject me for being transgender. Out of fear, I put walls up . . . Our new name, Courageous Freedom, has solidified how important it is for me to be the first to accept myself. We live in a society where transgender and gender-nonconforming human beings are committing suicide and being murdered at an alarmingly high rate. I am determined that I will courageously move forward as a Bodhisattva of the Earth.

What can the SGI and Nichiren Buddhism offer to the discourse on gender and sexuality for the queer community?

Kelly: The following words of Nichiren state plainly his all-embracing perspective on the vast diversity of life: “Each thing—the cherry, the plum, the peach, the damson—in its own entity, without undergoing any change, possesses the eternally endowed three bodies [of the Buddha].”

The Buddhist teaching of the Lotus Sutra embraces all beings, with no distinctions, highlighting that all have unlimited worth and potential. This means the SGI embraces all people of diverse sexual preference and identity, which is unique to the religious experience of many LGBTQ people. Thus, the SGI offers a welcome space that is particularly inviting to and supportive of LGBTQ people.

Through Buddhism, a path between extremes, I found a way to reconcile binary ways of thinking.


Alex: Until I encountered the SGI, I’d only been exposed to the public discourse on human sexuality and gender diversity which never seems to move beyond the dichotomy of orientation vs. choice, or nature vs. nurture. Through Buddhism, which is based on cause and effect and which emphasizes a path between extremes, I found a way to reconcile binary ways of thinking. In my understanding, we have made the choices, or causes, in other lifetimes that have led us to be born exactly as we are. Thus, we have made clear a “preference” for our “orientation” in this lifetime. That’s a very empowering thought to me—I did choose to be exactly as I am. Now, and every moment, I get to make the choice to see my situation as negative karma or as a value-creative choice, a mission to show other LGBTQ people that they can be absolutely happy, no matter what obstacles they face.

I am a writer and editor by trade and a social justice activist by instinct. I am grateful that the profound power of my 21-year Buddhist practice has led me to the right place at the right time for best using my determination and my capacities to help create a fairer world. At the Canadian Tribute to Human Rights [©Michael Sunderland] I’ve been privileged to be part of two community-based

Mira: Nichiren Buddhism teaches the equality of all beings and offers the unique religious perspective that people can achieve enlightenment or inner happiness on this Earth just as they are. There is no judgment of individuals, so the idea that our gender or sexuality has a negative bearing on our ability to be happy doesn’t exist. I think this Buddhist viewpoint offers an easy and welcoming entry point for dialogue on gender and sexuality, especially for young people in the queer community. In addition, Buddhist philosophy offers the key to becoming a happy and contributive human being, no matter how one identifies.

What are your hopes and visions for the future development of the Courageous Freedom group?

Marty, Kelly, Mira and Alex: We are all determined to make the spirit of the Courageous Freedom group synonymous with the spirit of courageously introducing as many people as possible to the power and dignity of their lives by introducing them to the SGI and to Nichiren Buddhism.

We also want everyone to associate our group with the spirit to unite and support one another. If I’ve had a negative experience for being who I am, I’m going to go that much deeper with my determination to treasure every person in my community—striving with this intent, we want every member of the Courageous Freedom group to know in their hearts that each of our lives is valuable and that we have a unique mission to express it in our own unique way. Never giving up on ourselves or President Ikeda’s vision of our absolute happiness, we are determined to become respected by everyone and to make a transformative impact on society. 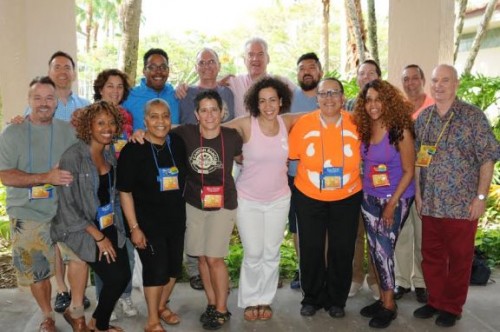 Alex Boling (back row, third from right) is an actor and writer in Los Angeles.

Marty Chapman (back row, third from left) lives in Chicago, where he works as a staff member for SGI-USA.

Phyllis Goodson (front row, third from left) works in education administration and is currently a regional vice president for a network of charter schools in Illinois.

Gary Murie (front row, far right) is a staff member in SGI-USA and currently lives in Los Angeles, where he works in art direction and design.

Kelly Niceley (front row, fifth from left) is an art therapist practicing at a treatment facility in Brooklyn, New York, that supports HIV-positive men and women.