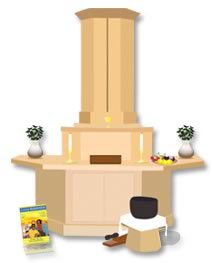 The object of devotion in the form of a scroll inscribed with Chinese and Sanskrit characters is the focal point for chanting Nam-myoho-renge-kyo and reciting the sutra during gongyo.  Nichiren taught that one should have faith in this Gohonzon as the object of devotion for attaining Buddhahood.

Nichiren defined the ultimate Law permeating life and the universe to be Nam-myoho-renge-kyo and embodied it in the form of a mandala, on this Gohonzon.  In Japanese, an object of devotion is called honzon, which means object of fundamental respect.  Go is an honorific prefix.

The butsudan, a cabinet that enshrines and protects the Gohonzon, literally means House of the Buddha. The Butsudan is the cabinet where you enshrine your Gohonzon to protect it.

The butsudan is typically made of wood and can range from a simple, plain design to elaborate finishes and hardware. Every believer should endeavor to keep the butsudan dusted and clean and make it an attractive and safe place for the Gohonzon.

Fresh cut evergreens are a traditional offering which symbolize the Buddha’s enlightened physical property.  The evergreens are used to adorn the space before the Gohonzon, as a symbol of eternal life.

Evergreens symbolize the “property-of-action” or the Buddha’s compassionate action and potential to form a correct relationship with the environment that allows us to manifest our Buddha nature.  Therefore, they should be something symbolic of permanence and purity.

Artificial leaves are also a common alternative, especially where fresh greens are not available.

The light of candles is an offering symbolizing the wisdom of the Buddha.   Candles also represent the property of wisdom or the Buddha’s enlightened spiritual property and the potential to become aware of our innate Buddha nature.

Candles stand for the truth of non-substantiality or the latent potential of life.  Since it extinguishes darkness and makes all things visible, light expresses the Buddha’s virtue of wisdom so we also have expressions like “Light of the Law,” “Light of the Buddha,” and “Light of Wisdom.”  Burning candles thus also signifies incinerating earthly desires and the flame of wisdom in the Buddha nature.  Electric or battery operated candles are also used, especially where young children are present.

Fragrant incense is an offering representing the truth of the Middle Way of Buddhism.

The essential property of the Buddha’s life or the property of the Law and the potential of our innate Buddha nature is represented in the burning of incense.  The incense burner is placed in the center of the altar, and the incense is burned from left to right.  Incense serves to create a fragrant atmosphere and is burned in front of the Gohonzon during morning and evening gongyo.  One to three sticks of incense are burned in a flat position to help engender a feeling of serenity before the Gohonzon. In cases where there are concerns over allergies or personal preferences incense is not used.

A cup of fresh water is usually placed on the altar in front of the Gohonzon each morning prior to morning gongyo and is removed before evening gongyo.  Water has the property to purify.  Purity, one of the four virtues describing the true nature of a Buddha’s life.

Traditionally, water was offered as something of great value in the hot country of India where Buddhism began.  After being offered, the water may be put into another cup and then consumed.

Fruit or other non-animal foods can be offered to the Gohonzon.  When offering food, we ring the bell three times, place our palms together and chant Nam-myoho-renge-kyo three times as a gesture of gratitude and appreciation.

The food may be consumed after it has been offered to the Gohonzon.  Cooked food, such as rice, is sometimes offered on special occasions, such as New Year’s Day.

The ringing of the bell during gongyo serves to offer a pleasing sound.  It should therefore not be sounded jarringly, but in a way that is pleasing to the ear.  There is a specific pattern of bell ringing in the course of the morning and evening recitation of the sutra gongyo.  It is described in the book, The Liturgy of the Buddhism of Soka Gakkai International.

The bell also communicates the starting and stopping of chanting for groups of people chanting together. If you live in an apartment complex or with others, be careful not to ring the bell so loudly that it might disturb them.  The ringing of the bell is an offering of a pleasing sound.

Prayer beads are held in the hands during the recitation of the sutra and the chanting of Nam-myoho-renge-kyo.  A traditional accessory, prayer beads have 108 beads, which symbolically represent the number of earthly desires that common mortals have and which are purified through one’s Buddhist practice.

When we use beads during gongyo, after twisting them into a figure eight, the end with the two strands, is placed over the third finger of the left hand.  The end with the three strands, over the third finger of the right.  They lie on the outside of the hands, which are placed together with palms and fingers touching each other.  Although traditional meaning has been assigned to the various parts of the prayer beads, they have no special power and are not an essential part of the Buddhist practice.

There are three fundamentals in the practice of Nichiren Daishonin’s Buddhism.  Faith, Practice and Study.  Faith means to believe in the Gohonzon. Practice means to chant Nam-myoho-renge-kyo ourselves and to teach others. Study means to study and understand the Buddhist teachings.

Among these three, faith is the most fundamental for the attainment of Buddhahood.  Faith gives rise to practice and study, and practice and study serve to deepen one’s faith. Nichiren taught that study is an essential part of the practice.  The Writings of Nichiren Daishonin, World Tribune newspaper, Living Buddhism magazine and many other SGI publications contain study material centered on Buddhism.