With appreciation and a fighting spirit comes deep transformation. 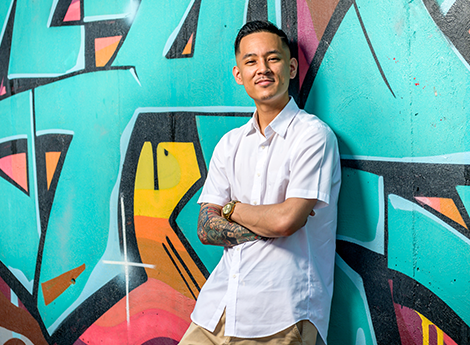 In Spring 2014, I was 21 years old and arrested for selling drugs. Due to my intense financial struggles, dealing drugs, I thought, was the only way to make money. Fortunately the charges were dropped, but my challenges continued. One by one, my gas, water and electricity were turned off, which led me to take up an offer to live with a friend.

At my lowest point, I couldn’t afford to eat for two to three days and even contemplated suicide. I felt that being dead would be better than having to suffer. I desperately reached out to my dad for help, although I had struggled to build a relationship with him after my parents separated when I was 6.

My father began sending me the SGI-USA publications and Buddhist in America videos, and told me to resolutely chant Nam-myoho-renge-kyo. I decided to re-enshrine the Gohonzon and chant to get my life back together.

I was amazed when, just three weeks after praying with determination, I got a job. This convinced me of the power of this Buddhism.

When I decided to get connected to a district, my young men’s leaders visited me in my tiny bedroom, which barely fit everyone. I was nervous and felt weird at first, but in the end, I was very encouraged by their sincere efforts to get to know me.

My district was a place of no judgment—full of people who cared for and raised me. At times, my leaders would just listen to me and at other times, they would chant with me and check in to see how I was doing. Being embraced by my district made me want to be a better human being.

It was also in the district where I first learned about the May Commemorative Contribution activity. I was initially hesitant, but felt that if financial contributions would allow just one more person to experience what it is like to be a part of the SGI family, I wanted to participate with all my might. I saw this as my opportunity to break through my selfish nature while reflecting on what I appreciated.

Chanting this way filled me with great joy and gratitude, even toward my parents for giving me life. If I felt anxious about how I was going to pay my bills, then I chanted to dig deeper in my gratitude until I felt so much happiness that it brought me to tears. Despite my financial struggles, I wanted to make sure that I could contribute with the right spirit. Since that time three years ago, I’ve never missed out on participating in May Contribution.

Once again, I found myself deeply struggling, as I was preparing for the 50,000 Lions of Justice Festival in 2018. My girlfriend, who was supposed to visit me from overseas, abruptly ended our relationship. I was heartbroken.
I held on to SGI President Ikeda’s guidance from A Youthful Diary: “A lonesome youth. A young man gripped by myriad emotions. Fateful days of youth. I can only advance with all my might. In any event, whether joyful or suffering, I must advance, as a child of the Gakkai” (p. 201).

I recognized this difficulty as an opportunity to receive training from my mentor, enabling me to develop compassion and a fighting spirit. It was a battle, but I made it a top priority to go straight to the Gohonzon to reflect on my appreciation.

I poured my whole being into ensuring that the 50K festival would be a complete success. I was working a 12-hour night shift at the time, but I challenged myself to win at work and participate in SGI activities.

My district was a place of no judgement—full of people who cared for and raised me . . . Being embraced by my district made me want to be a better human being

When May Contribution came around, I was able to contribute the money that I had been saving for my ex-girlfriend’s trip. Then, not long after, at the end of May, I was hired for a full-time, permanent position at an automotive manufacturing company. I received full medical benefits for the first time in my life and began earning five times more than what I had previously made!

Today, the dynamics in my family have changed from one filled with misery and disappointment to enjoyment and trust. Recently, my mother, sister, father, stepmother and I gathered in Atlanta for the first time in almost 20 years.

Sometime after I started practicing, I was astounded to learn that when second Soka Gakkai President Josei Toda opened up the financial department for families to make contributions, my family had the opportunity to contribute. I clearly see how we have been able to transform our hardships into victories across generations because of this practice and the opportunity to express our appreciation through financial contributions—which advance our movement for peace.

My determination for the Year of Soka Victory is to return to school to accomplish my dream of becoming an English-Japanese interpreter. I will fuel this not only by challenging myself in May Contribution but also by doing my best to encourage the young men in South Zone to feel the great joy of Buddhist practice with the SGI.

To me, May represents the time of the year when we make a tremendous cause that changes our lives in more ways than we could ever imagine. WT