Creating a “River of Fortune” 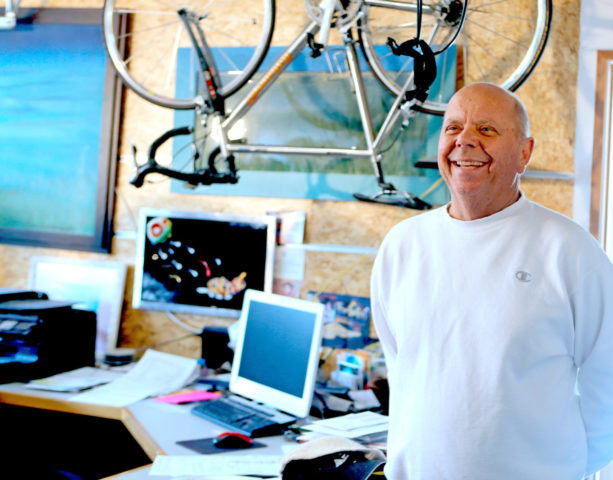 When my brother’s friends returned from the Vietnam War, their horror stories cemented my firm stance for peace, which was what attracted me most to the SGI when I was introduced in 1971.

I chanted Nam-myoho-renge-kyo, attended activities and read SGI President Ikeda’s guidance. I made monthly financial contributions, although I was poor, because I knew that I was contributing to the peaceful world I yearned for. I was becoming happier and developing better relationships, but I still struggled with my finances.

I gave up my dream of being an artist and found work in the extremely volatile construction industry as a carpenter. I would chase down employers to get paid, and sometimes their paychecks would bounce. I was often asked to take more responsibility on a job but never got a promotion or salary increase. Eventually, my credit became so bad that the bank closed my checking account. I was forced to cash my paychecks and pay extra fees that I couldn’t afford. It didn’t seem fair. I was making causes through my Buddhist practice, and I couldn’t figure out why this area of my life wouldn’t change.

Feeling desperate, I began chanting deeply to change myself. I realized that at my core, I considered myself a victim of my circumstances. I thought my financial problems were a result of other people’s mistakes.

So long as I chose to be a victim, I had no ability to change my situation. I couldn’t be a victim and a Buddha; I was one or the other. So, I determined that I would: 1) overcome my poverty; 2) no longer be indebted to anyone; and 3) make causes consistent with my new determination.

That same day, I received a letter from the State Franchise Tax Board stating that I owed an extraordinary sum in back taxes. I knew this obstacle could either derail me from my new determination or help me with my mission as a Bodhisattva of the Earth. I decided on mission. Instead of losing my temper as I usually did, I simply called and made arrangements to make payments until the problem was figured out. Because I didn’t give in to powerlessness in that moment, I created value.

After several months, the SFTB acknowledged their mistake and sent me a check for the total amount I had paid, plus interest.

With my refreshed spirit, I intensified my efforts to learn and go beyond what was expected of me at work and the SGI, based on three points that I learned from Sensei’s guidance: 1) lead by example; 2) never ask someone to do something you wouldn’t or couldn’t do; and 3) go where it’s most difficult.

Over time, I found myself working for more financially stable companies. My work became steady and my salary consistently increased. As a result, I was able to open a bank account again, and my credit rating greatly improved.

I changed my fortune in other areas, too. In 1992, I married my amazing wife, Debbie. Today, we have a harmonious family with wonderful children and grandchildren. This was my impossible dream come true.

As a couple, we chant to stretch our hearts and increase our sincerity and appreciation in making
offerings to advance kosen-rufu. Twelve years ago, we decided to challenge ourselves to make a large contribution goal every May 3 for the following 10 years. This meant that I would have to advance more at work. Although a struggle, we completed our 10-year goal and set a new goal for another decade.

Sometime before, I had begun working for one of the most successful heavy civil engineering companies in the U.S., working up to the position of superintendent. I was invited to become a stockholder and after nine years I moved on to another company, where I was able to become a stockholder as well. In 2007, during the financial downturn, my company remained very profitable while many companies went out of business.

Then two years ago, I had to stop working due to kidney failure. Normally this kind of obstacle would be catastrophic to one’s finances, but I was protected when I sold the stocks I held in one of my former companies.

I needed dialysis three times a week for 4.5 hours each time. It was so debilitating that I determined to receive a kidney transplant to enable me to fulfill my vow for kosen-rufu. The waiting list for people who needed a kidney at the top hospital near me was eight years.

The fortune from making many types of contributions to support kosen-rufu over the years manifested at the crucial moment. When I first started practicing Buddhism, I strove to value my friends. That’s when I met Gary, whom I’ve worked with for the past 42 years. He moved away to Hawaii but we stayed in touch. One day, I shared with him my struggles. Right away, he insisted that he would give me his kidney and declared that he would be a match. And he was. I determined that Gary would also have a transformative life experience as a way to repay my debt of gratitude.

On May 16, 2017, we had a successful kidney transplant, and we both healed in record time. Gary and his wife stayed with my family during the recovery period. As former colleagues, friends and fellow SGI members visited me, I believe that I was able to show Gary the life that I had created over the past 47 years with the SGI and the greatness of President Ikeda’s guidance.

On Nov. 20, 2017, Gary received the Gohonzon and is enjoying his practice in Hawaii. In his words, “Who in their right mind wouldn’t want to work for world peace?” I couldn’t be happier for my dear friend.

Through my Buddhist practice, all of my hardships have turned into a river of fortune. Now that I am retired, I’m able to spend more time with my family and work on my art, which I had given up for many years. I always create with the purpose that my art will introduce others to Nichiren Buddhism and Sensei.

My appreciation for my mentor and the SGI grows each day. I will continue to support this wonderful organization, awaken one Lion of Justice toward our 50,000 Lions of Justice Festival and encourage others toward empowering a new generation of bodhisattvas. I determine to take all of my four children and three grandchildren to the festival on Sept. 23, so that they too can be a part of the movement to give the world hope. If there’s anything that I’ve learned, it’s that if you have hope, you’re never a victim—you’re a Buddha.