Winning the Trust of Others by Leah Damiani

I grew up in the oil refinery town of Farmington, N.M., with an Italian father and Ghanaian mother. My parents bickered and yelled constantly at each other, and I came to adopt these same angry, confrontational traits.

I felt ashamed of who I was and coped with my insecurities by keeping others at an emotional distance. By the time I was a teenager, I suffered from clinical depression.

The one thing I had going for me was school. I was a hard worker who excelled in class. After high school, I moved to Albuquerque, N.M., where I earned a bachelor’s degree in biochemistry and a Ph.D. in biomedical sciences from the University of New Mexico. But after five years in graduate school, I made the decision to apply to medical school and was accepted in 2008 to the University of New Mexico School of Medicine. Deep down, however, I was conflicted about my decision to leave academic science. This lack of clarity definitely reflected in my grades and overall attitude.

In 2009, I was nearing the end of my first year in medical school in a state of complete misery. I struggled to get out of bed every morning, and I always dreaded the day ahead.

Around that time, a classmate from my Ph.D. days invited me to a Buddhist meeting at the local SGI-USA center. As I stepped into the building, I immediately felt a sense of warmth and familiarity.

Everything about Buddhism made sense. I tried chanting Nam-myohorenge-kyo for the first time that night after the introductory meeting. The next morning, something changed. I hopped out of bed and even arrived to school early for the first time. It was as if the fog of sadness had lifted from my life. To this day, I have not felt that same depression again.

I received the Gohonzon shortly after, on Jan. 1, 2010. It was only afterward that I realized why everything seemed to be a struggle: I lacked a solid sense of purpose in life. This is when I decided to take my mission in medical school more seriously. As SGI President Ikeda often points out: “The most important thing is to first become indispensable wherever you are” ( Discussions on Youth, new edition, p. 77). From then on, my attitude started to change, even in the face of serious obstacles.

For example, the following year, in May 2011, I failed the United States Medical Licensing Examination. I was upset, of course, but, to my surprise, I wasn’t devastated. To retake the exam would be financially and mentally straining, but I reregistered for the exam the very next day.

To prepare for the test, I drove back to Farmington to stay with my mom. I studied hard at the library every day and remained in high spirits, which impressed my mother. In my second attempt two months later, I passed the exam.

This inner strength was no doubt a result of committing fully to my Buddhist practice, which shifted after I challenged myself to attend an SGI Youth Culture Festival in Chicago in July 2010.

I was moved to see other youth who were so motivated to win in life and society for the sake of world peace, and it made me feel optimistic about the future. I was also deeply moved by the amount of diversity among the participants. The festival really changed the way I felt about my own potential and what human beings can achieve.

As a result of that awakening, I quickly became a young womens leader in neighborhood district discussion group. It was in this role that I learned how to have compassion for people and care for them, which translated into my work as a medical student (and as a physician today). I even learned how to better support my friend who received the Gohonzon a few months after I did.

I experienced other struggles that, without my buddhist practice, would have toppled me. In my second year of medical school, on Nov. 18, 2010, I was rushed to the emergency room with severe stomach pains and had to undergo emergency surgery to remove my appendix.

Afterward, I received a $13,000 bill for my one-day hospital stay, and I missed a week of critical classes. To add insult to injury, my boyfriend at the time dumped me. At this crucial moment, I began chanting one hour every morning to fight these obstacles, and I transformed them one by one. Over Christmas break, I caught up on my classes. I then received an anonymous phone call from someone suggesting that I apply for the university-run health care program, which medical students are not usually eligible for.

I went to the health care office with a $13,000 bill and walked out with a $40 bill. Other medical students applied for the same program after that, but their applications were rejected. To this day, I don’t understand how mine was approved.

I’m grateful for this first major obstacle, because it gave me a deeper appreciation for what patients face. The two doctors who operated on me were very compassionate; I felt cared for and safe in their hands. This inspired me to want to become the kind of doctor who patients can trust and who puts them at ease.

All these conspicuous benefits enabled me to use my Buddhist practice to tackle the deeper, seemingly intractable parts of my family karma. In May 2012, just before starting my residency in Long Beach, Calif., I attended a conference at the SGI-USA Florida Nature and Culture Center, where I determined to have a breakthrough with my father, whom I had long resented.

I wrote a detailed email to him and got an unpleasant response. I was so mad that I chanted in desperation at the FNCC’s 24-hour Lakeside Gohonzon Room. As I chanted, I realized that this problem had ultimately little to do with my father. The thing I needed to overcome was my own anger and resentment toward him.

In my second email, I responded with kindness and compassion, and my father responded in kind, which opened up our relationship. Today, we are developing our first genuine relationship as father and daughter.

I have so much appreciation for the SGI-USA. As a district leader, I have learned how to lead, encourage, move and listen to others. As a member of Byakuren, the behind-the-scenes training group for young women, I have learned to focus on serving the members from behind the scenes.

Such life training has enabled me to win the trust of my patients. While many of them have expressed appreciation for my care, I know it has nothing to do with knowledge. Rather, they are responding to the compassion, sense of responsibility and heart I have cultivated through my Buddhist practice.

Every morning, I chant to live as a disciple of my mentor, SGI President Daisaku Ikeda—to be the kind of physician who is a friend to the suffering. I will continue to develop my abilities toward this end, striving to make a difference in others people’s lives. As a resident physician, I work rather long hours. However, no matter, what, I stay connected and active in the SGI-USA. For me, it is the key to never being defeated. 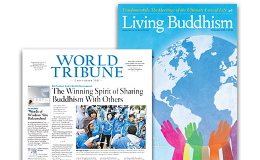